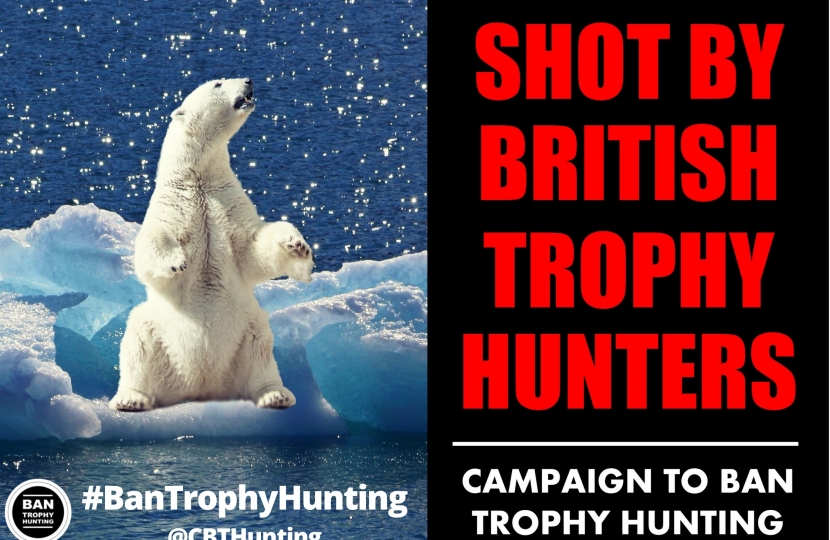 Romford M.P. Andrew Rosindell has called on the government to ban imports of hunting trophies without delay.

The government has released details of a proposed bill to ban trophies, but has not said when the bill will come to parliament.

New figures reveal that – despite COVID - British trophy hunters still killed some of the world’s most threatened animals in 2020, including lions, elephants, hippos, giraffes, leopards, bears, and zebras.

The Government says its bill to ban trophies has been delayed due to lack of time.

“It’s time to bring this barbaric trade to an end. A ban on trophy imports is backed by 85% of voters. I call on the government to bring this bill to Parliament as quickly as possible. The longer it delays, the more animals are killed for so-called sport, selfies and sick souvenirs.”

“We’ve just had the COP summit in Glasgow where politicians discussed how to save wildlife such as polar bears that could go extinct from climate change. Yet trophy hunters are still allowed to shoot polar bears and bring their bodies back to Britain. It’s utter insanity.

This Christmas, the government can give defenceless animals the gift of life by either publishing its bill or adopting John Spellar M.P.’s private members bill instead. There is no justification for delaying any further.”

“It has been two years since the ban was promised in the 2019 Queen’s Speech. Another 300 animals at risk of extinction have been killed by British trophy hunters since then. The Government should be moving as swiftly as possible to stop this terrible trade.

The Government recently adopted Dr. Liam Fox M.P.’s bill on providing lifelong care for people with Down’s Syndrome, in order to bring the law into effect. It should do the same with John Spellar M.P.’s bill to ban trophies. Delaying action costs lives of some of the world’s most threatened animals.”