Andrew Rosindell on Catalonia and Brexit 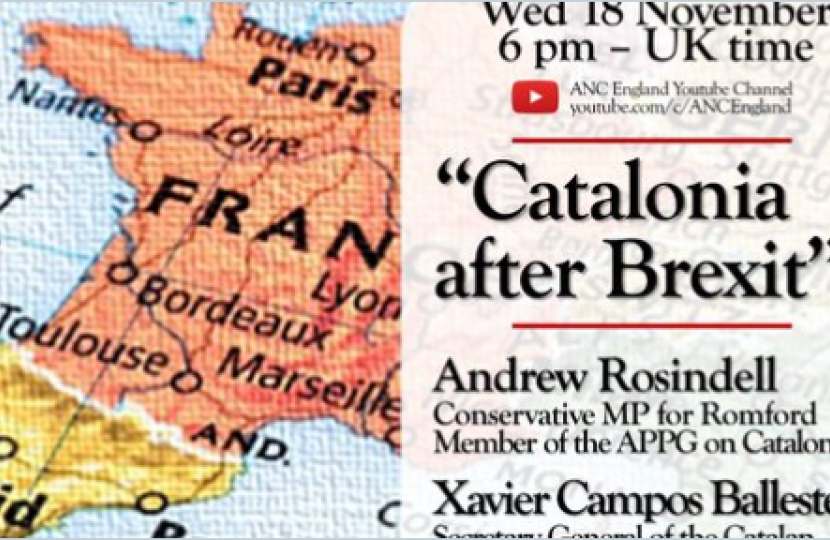 On the 18th of November, Andrew spoke at an ANC England event on Anglo-Catalan relations after Brexit.

The Catalan National Assembly in England is a non-partisan organization aiming to help the Catalan independence movement from England.

Andrew is the Vice-Chair of the APPG for Catalonia.

Extracts of Andrew's appearance are below.

On Anglo-Catalan relations after Brexit:

"I see it as very important that the UK starts as we mean to go on following Brexit and we build bilateral relations with our friends and allies around the world and I include Catalonia as a friend and an ally to Britain but most especially to England.

Our historical links run deep, and this is a new opportunity for the British and Catalonian people to forge a strong partnership."

On Brexit, and its impact on Europe and Catalonia

"Brexit is a huge act of self-confidence, of sovereignty, of self-belief. Our history is such that we have no fear about being an independent country, about making our own decisions in our own interests while forging ahead with bilateral friendships and agreements and cooperation with our friends and our neighbours and our allies.

This is a positive thing. It may not be seen as such by some, but in the long term I believe it will be seen as a hugely beneficial decision to the British people, but also to the people of Europe, because Europe needs a new direction. The concept of Europe as being an ever-closer federation, rather than a collection of free and independent nation states, is wrong. The people of Europe cherish their nationality, cherish their self-determination and independence. They want to cooperate with their friends and neighbours, but they want to be in charge of their own destiny. That is what the British people have chosen to do, and that is what I believe the people of Catalonia will eventually succeed in doing themselves, although it is a matter for the people of Catalonia to decide that, not for me and not for anyone outside of Catalonia."

On the challenges and opportunities of Brexit

"There are many opportunities before us. Many hurdles as well, no one denies that. Brexit is to some extent uncharted waters. We have been in the European Union, or previously the European Economic Community since the early 1970s. But as history teaches us, every organisation, every empire, every structure, has to change or it dies. And I believe the EU has been far too rigid, far too inward looking, far too interested in its own interests than the interests of its nation states.

Brexit is an advantage to us. It means that Britain and Catalonia can come closer together. We can do many things bilaterally; although there will be restrictions because Catalonia remains part of the EU, that doesn't stop us from doing new things. There are many avenues of friendship and cooperation that can be explored in the coming years."

On Catalonian Independence and Spain

"Any changes that occur should be done by people exercising their rights and their freedoms, which all peoples of Europe deserve to have. This is why I'm so appalled at some of the actions by the government of Spain in how Catalonia has been treated in recent years.

I don't know deep down whether the Catalonia people would vote to have independence. I suspect they would, but a lot would not do so. But the actions of Spain only a few years ago when a previous referendum took place and their actions since if anything have quickened the pace towards the feeling by people in Catalonia that they want to regain control of their own destiny.

I hope the Government of Spain will allow Catalonia more freedom and flexibility to forge its own destiny. The last thing anyone in the UK wants to see is for Spain and Catalonia to have perpetual conflict, or for Spain to go through upheavals which could destabilise Spain itself."

On comparisons between Catalonia and Scotland

"The difference between the UK and Spain is that we allowed the people of Scotland to have a free and fair referendum, and have a choice. Spain seems to not want to allow the same democratic rights to the people of Catalonia.

I make no bones about it - I believe Scotland should remain part of the UK, although I would advocate a more federal solution, rather than the mess of devolution."

"The current government would not drop Gibraltar, and I think it would be very difficult for any British government to do so. It's very clearly established that the Gibraltarian people have the right of self-determination. The people of Gibraltar are the most loyal and patriotic British people you'll find anywhere.

Gibraltar is British, in perpetuity. But I don't think the Gibraltarians would ever give up their British identity and I think of all the British Overseas Territories, Gibraltar is the one that could potentially become part of the United Kingdom fully."

"In terms of Britain joining EFTA, I've always been fairly positive about the prospect of the UK joining EFTA once we leave the EU, but only on the basis of the Swiss membership of EFTA, not the Norwegian membership. We would never want to be in the EEA as we see this as being a supplicant to the EU. So EFTA is an organisation I would support Britain joining, provided there were no strings attached, provided this is purely an organisation to promote free trade and cooperation with like minded countries.

Each EFTA country has a different relationship with the EU, which is interesting because the EU likes to impose one size fits all on everyone."

On Scottish calls for a second independence referendum

You have to respect democracy from both ends. The winner wins, and the loser has to accept the loss. There are still issues with Scotland, but I believe that the Prime Minister needs to come up with a new plan. And that plan should be a new arrangement in the UK which is more on a federal basis."