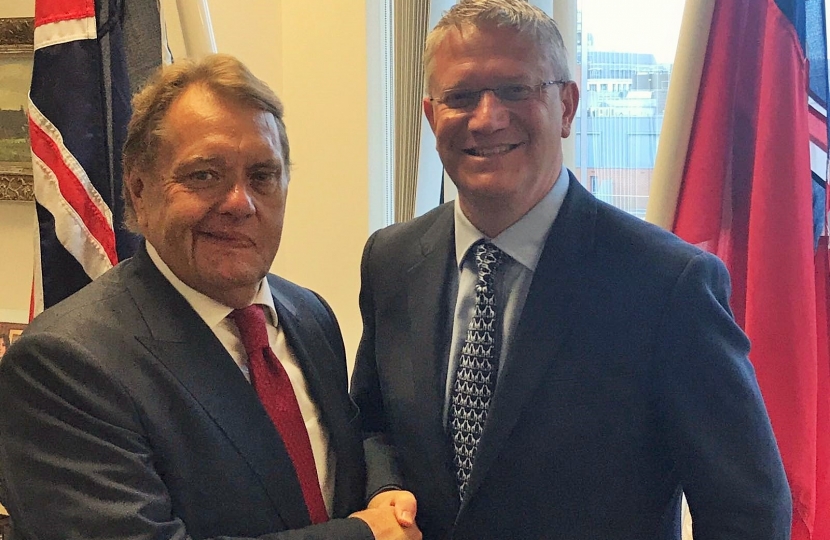 On 16th Wednesday Andrew Rosindell M.P., now Vice Chair of the All Party Parliamentary Group for Taxis, met with The Rt. Hon. John Hayes CBE M.P., Minister of State for Transport. Since the San Francisco based app opened in London a few years ago, Uber's rise and impact on the capital's transport network has caused much strife with black cab drivers, who claim that competition with the e-hailing app is an uneven playing field, due to outdated regulation and rapid changes in technology.

As a Member of Parliament who represents many black cab drivers in Havering, Andrew organised a meeting between the Minister of State for Transport, the United Cabbies Group, and the London Cab Drivers Club, in order to put their concerns forward to the department.

"The iconic black cab is as symbolic of Britain as the red bus, the red telephone box and Buckingham Palace, it would be a deep shame to see an honest and historic trade disappear from our streets due to a predatory corporation. There are deep issues with cross border licensing, safety standards and tax arrangements, which has rapidly affected the black cab industry. Many cabbies in the constituency make it very clear to me, they are not against competition, they co-existed with companies like Addison Lee quite amicably. The issue is unforced or even outdated regulation, it is clearly a un-level playing field.
Lots of issues were covered, we look forward to an ongoing dialogue as a new ministerial working group is set up to look into the practices of the private hire vehicle industry.”