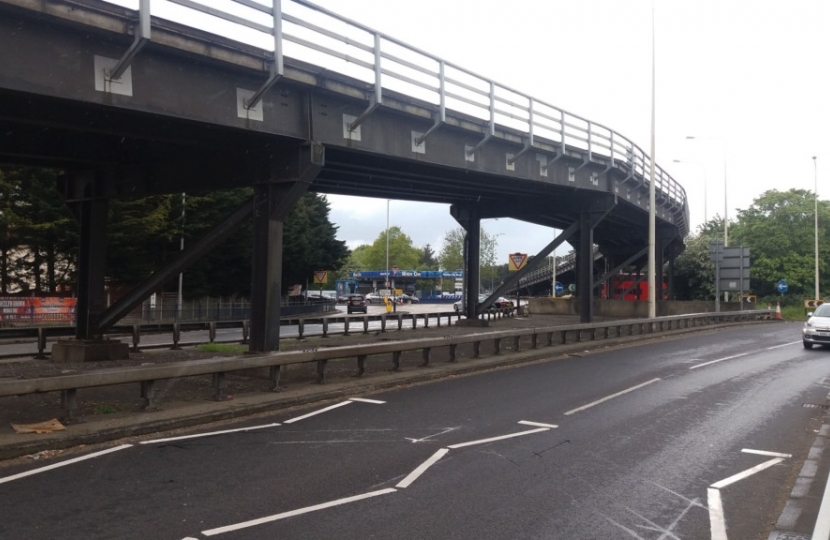 Andrew Rosindell said "Gallows Corner is one of the most dangerous road junctions in Greater London, after having made representations for its improvement over many years, I am happy to see it shortlisted as one of first five improvement schemes in Government's Major Road Network."

"Transport secretary Chris Grayling announced on Monday, October 1 that Gallows Corner has been shortlisted as one of the first five potential local road schemes in the government’s major road network programme.

The programme allows councils to bid for improvements to local A-roads and it’s part of the biggest road investment since the 1970s as each of the shortlisted schemes will be eligible for up to £50m of funding."

News reports indicate that TfL is considering scrapping the planned upgrades to Gallows Corner. TfL has been suffering from a funding crisis in recent months and according to the Romford Recorder "City Hall is having to consider the feasibility of the most expensive options, after the covid-19 pandemic wreaked havoc on Transport for London’s (TfL) finances."

In the 2nd of October edition of the Romford Recorder, Andrew's column focused on Gallows Corner, and his frustration at the reports. Writing, he said:

Fighting for a Gallows Corner Upgrade

On Thursday 10th of September yet another person tragically lost their life at the Gallows Corner junction. Stories of serious injuries and fatalities at Gallows Corner are far too common. With the “temporary” flyover marking its 50th birthday this year, I for one will not be wishing it many happy returns!

Instead I want to reassure the people of Romford that I am doing everything in my power to end this intolerable situation. For too long this flyover has been allowed to stand, despite the traffic, the accidents and the continuous maintenance it requires. A member of my staff recently went on street view on Google Maps and was stunned when he saw its appearance, shuddering at the thought of driving over it.

Our government is understandably focused on other pressing issues – defeating the coronavirus and the great national project of BREXIT, both of which I know my constituents care deeply about. However, the government has also committed to levelling up the country, including making improvements to our national infrastructure.

Unfortunately, TfL and the Mayor of London, Mr Khan do not  seem to agree!  Although Gallows Corner was shortlisted for potential improvements in the government’s ‘Major Road Network’, reports indicate that TfL are considering scrapping the upgrades. TfL’s funding crisis is not just an indictment of its own failings, it’s a reminder that we have a Mayor more interested in his image and in the central part of London, than in improving our infrastructure in the Essex end of Greater London!

As Romford’s M.P., I dismayed by this!  Abandoning vital infrastructure projects will only further compound the economic damage caused by this pandemic and working with our London Assembly Member, Keith Prince A.M.,  I will do everything I can to prevent the project from being abandoned and continue the fight for a new junction layout at Gallows Corner.

The Government has confirmed that it expects to receive an outline business case for a scheme to improve the Gallows Corner junction in Romford, after a written question was submitted on the matter by Andrew Rosindell M.P.

In his question, Andrew asked:

Andrew Rosindell has today urged the Prime Minister, Boris Johnson, to personally step in to ensure that Gallows Corner has the funding needed to replace the 50-year flyover.

On the 2nd of November, Andrew Rosindell appeared on Time 107.5 to discuss recent issues at Gallows Corner, and what he is doing to raise this issue with the relevant authorities.

You can see Andrew's recent letter to the Mayor here.

​​​Andrew Rosindell, the M.P. for Romford has written to the Mayor of London Sadiq Khan, to urge him to ensure that Transport for London follows through with much needed improvements to the Gallows Corner flyover.

Transport for London must not abandon Gallows Corner!

On Thursday 10th of September yet another person tragically lost their life at the Gallows Corner junction. Stories of serious injuries and fatalities at Gallows Corner are far too common.