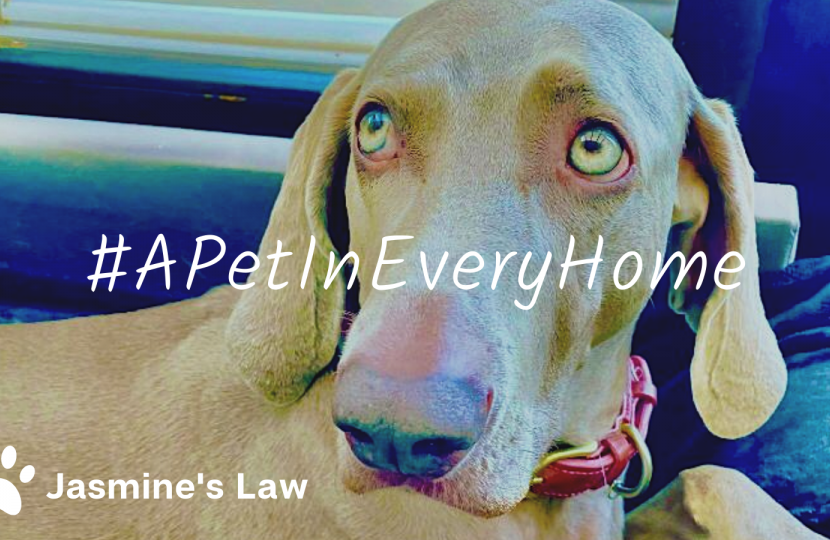 As part of a 10 Minute Rule Bill, a type of Private Members’ Bill, the former Shadow Minister for Animal Welfare and Member of Parliament for Romford is highlighting the frequently unjust way in which renters are forced to give up their beloved pets in order to move into new accommodation.

The legislation, backed by animal rights and animal welfare organisations, including the RSPCA and Battersea Dogs & Cats Home, will prevent landlords from banning “responsible owners” from bringing pets into rented accommodation.

Recognising the concerns that landlords have, the legislation will require renters to demonstrate they are “responsible owners” with a suggested checklist including a vet’s confirmation that their pet is vaccinated, spayed/neutered, free of parasites and responsive to basic training commands in the case of dogs. In cases where the renter can prove they are a “responsible owner”, and the accommodation is suitable for their pet, the right to take a pet into rented accommodation would be assumed.

The legislation is being called “Jasmine’s Law”, named after a dog which was separated from its owner, Jordan Adams, because of restrictions like these. He will also highlight the tragic case of John Chadwick, a homeless man who ended his life after the only housing option his local council provided him with was one which meant separating from his beloved pets.

“I’m delighted to have secured this slot to speak about an issue deeply important to me. As a dog owner for twenty five years, I understand as well as anyone the connection a person can have with their pet and for too long I have heard tragic stories of pet owners separated from their pets because of blanket bans that landlords implement.

It is a huge opportunity to increase awareness of this issue and to pressure the government to make changes that they promised earlier this year. In January the Housing Secretary Robert Jenrick rightly called on landlords to make it easier for responsible tenants to have well behaved pets in their homes, but as of yet this hasn’t been followed by any legislation.”

Andrew Rosindell has today resent a letter regarding proposals to amend the Tenant Fees Act to make it easier to bring pets into rented accommodation, following Robert Jenrick's replacement as Secretary of State by Michael Gove.

A cross-party group of over 35 MPs and peers have joined leading pet charities and landlord associations in penning an open letter to Robert Jenrick, Secretary of State for Housing, Communities and Local Government, urging him to amend the Tenant Fees Act after new research demonstrated the negat

Andrew's Office was delighted to attend a roundtable organised by the All-Party Parliamentary Group on Cats (APGOCATS) on Tuesday 16th March to discuss how pet ownership can be better supported for the rental market.

Back in 2020 I became conscious of the enormous problems that renters were facing with regards to pet ownership.

The full schedule has been published for Andrew Rosindell M.P. and Public Policy Exchange's event on #APetInEveryHome and pets in the age of lockdown. If you haven't registered already, please click here to do so.

The Model Tenancy Agreement has been changed to make it easier for tenants with well-behaved pets to find rented accommodation, in what is being described as a "massive acknowledgement to Andrew Rosindell's already successful campaign for Jasmine's Law."

EVENT: #APetInEveryHome - Jasmine's Law and Pets in an Age of Lockdown

On the 26th of February, Andrew Rosindell will be hosting an event on his Ten Minute Rule Bill, "Jasmine's Law" and his campaign for #APetInEveryHome

On the 12th of November, Andrew Rosindell M.P. appeared at a Public Policy Exchange event to discuss his campaign to allow #APetInEveryHome.