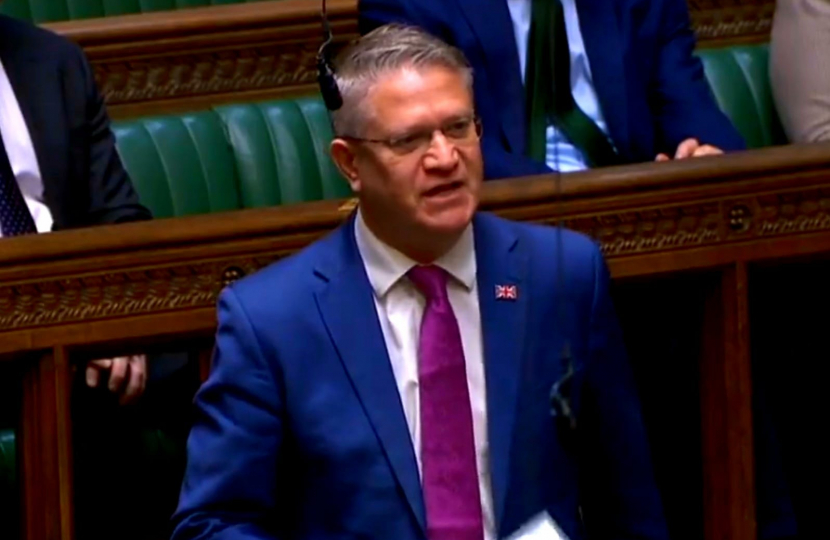 Andrew Rosindell, this month wrote a column for political affairs and comment magazine, Bournbrook on the current situation in Ukraine, you can read his full thoughts below:

A Trilemma: Ukraine, Putin and N.A.T.O.

As Clausewitz's famous dictum states ‘War is a continuation of politics by other means.’ In Putin’s invasion of Ukraine, he has combined the role of military commander and political leader. The die has been cast, and it is now up to the West and N.A.T.O. to ensure that he fails.

Vladimir Putin is undoubtedly a product of the collapse of the Soviet Union. His express aim is to revive the former ‘Russian Empire’, whatever that entails, and to stake his claim over the former vassal states and bordering countries. His ambitious objectives under the guise of ‘de-Nazification and demilitarisation’ are to destroy a democratic sovereign state on Russia’s borders and to project Russian military power.

The failure of the West to act decisively in response to President Putin’s invasion of Georgia in 2008 and Ukraine in 2014 has given Putin confidence that the West would roll over again in 2022. The chaotic withdrawal from Afghanistan has further cemented this in his mind.

The strength and resolve of the Ukrainian people were clearly underestimated by the Kremlin, and Putin has fallen victim to his own propaganda. This war has been far broader than any of the operations Russia has carried out previously and Russian forces have experienced significant resistance. The Ukrainian people have not welcomed the Russian soldiers as ‘liberators’ freeing them from fascism but as tyrants.

An independent sovereign democracy is being invaded in Europe in our lifetime, and it is our moral duty to come to their aid and repay the bravery they have shown. Britain has led the way in this crisis. As part of the integrated review, the Government increased our defensive expenditure by £24.1 billion, up to 2.2% of GDP. Before the invasion, we supplied Ukraine with 3,500 N.L.A.W.s and trained 22,000 Ukrainian soldiers how to use them.

The U.K. has sanctioned more Russian bank assets than any other country in the world, amounting to hundreds of billions of pounds. We are offering medical supplies, continued lethal military aid and diplomatic support. Recently, I have been contacted by various charities, individuals and businesses willing to offer their support for free and I have written to the Foreign Secretary to create a route for those people willing to give their time to support the people of Ukraine.

We must go further and faster, increasing the number of individuals and entities sanctioned, but also ensuring that sanctions take effect immediately. Our actions need to be co-ordinated with our allies for maximum effect. A more United West will emerge from this crisis, as we have seen Germany fundamentally rewrite its post-war foreign policy over the course of a week. It is vital that we keep this unity to respond to threats from the economic juggernaut China, with whom we cannot respond to the same financial measures imposed on Russia.

In the coming months, we must support Germany, Italy, and our other European partners to wean themselves off Russian oil and gas. It is welcome that alongside the United States, we will no longer import any Russian oil.  It is time to look to alternative domestic sources of energy, ranging from nuclear power to shale gas and sustainable renewable resources.

N.A.T.O. partners have come together in the midst of this crisis, and it is vital that this unanimity is maintained. One of the first steps should be for every member to commit to the 2% GDP target for defence. This is a turning point in our history, and time for sovereign democracies to come together to protect fundamental values of freedom of choice, human rights and self-determination.

However, it is vital that our response shows restraint and protects human life. It is welcome that the Prime Minister has ruled out no-fly zone, and will counter the threat of military escalation through N.A.T.O.’s policy of military neutrality. We learnt from the Cuban Missile Crisis never to enter a conflict with another military nuclear power and this is prescient today.

Our focus must be on diplomatically and economically isolating Russia from the world stage, preventing Putin from funding his war machine through the expansion of our sanctions against Russia. N.A.T.O. and its allies will continue to provide lethal defensive weaponry to the Ukrainian Armed Forces to counter Russian armour and air support. Britain will lead the way in this endeavour.

Putin will not achieve his ambitious and tyrannical political objectives. His strategy to date has been to rationally manage risk and formulate a policy of intervention at an acceptable cost. He has miscalculated. Western democracies have united to announce the largest package of sanctions ever, the Ruble has collapsed, western firms are pulling out of Russia and Russian planes cannot fly over many western countries. Putin is reliant on domestic support and legitimacy, economic turmoil at home coupled with a stalling military effort will force him to rethink. The Russian people are not to blame but will suffer the terrible consequences of Putin’s War.