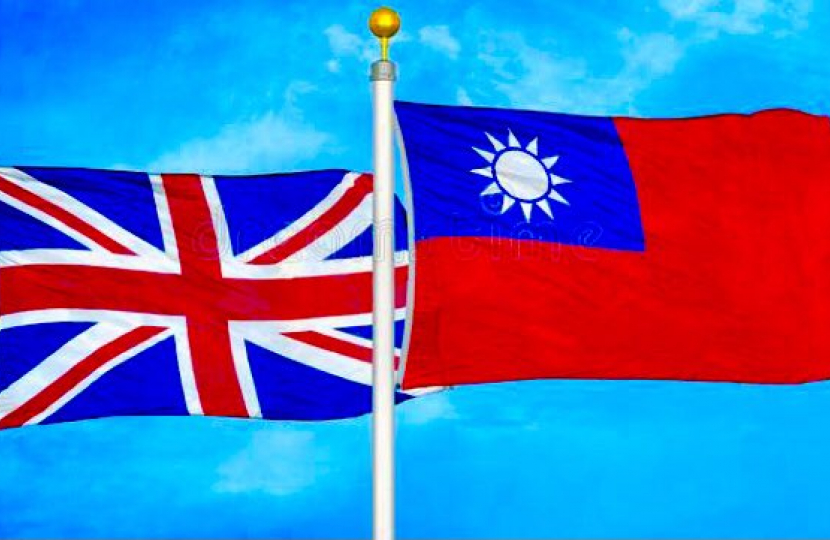 Taiwan is a beacon of liberty, freedom and democracy in a region of the world overshadowed by a larger neighbour that has demonstrated, time and again, a total disregard for human rights and freedoms.

The United Kingdom shares a deep and enduring relationship with Taiwan.  Taiwan is a true friend of the UK.

We share the same values.  We enjoy close bi-lateral cooperation and Taiwan is one of our most significant trading partners.

Taiwan is exactly the kind of sovereign, forward-looking collaborative nation, that Global Britain should be forging stronger ties with, now that Britain is free of the constraints of the European Union.

From its exemplary response to the handling of coronavirus to its pioneering work in technology, Taiwan is a country to emulate and one the United Kingdom should be working more closely together with.

In contrast, the People’s Republic of China is, to be clear, a totalitarian, anti-democratic, communist state, that continues its threatening campaign of fear and intimidation against the people of Taiwan.

Mr Speaker, in the year 2022, such behaviour is completely unacceptable, and the United Kingdom must stand shoulder to shoulder with Taiwan today, we in this House, must restate our strong friendship and commitment to Taiwan and the Taiwanese people.

For me, it has always felt wrong that the United Kingdom does not have any formal diplomatic ties with Taiwan, without an official embassy, whilst at the same time, China is able to use economic leverage to bludgeon other states to cut ties with Taiwan.

It was our own former Prime Minister, Margaret Thatcher who visited Taiwan in 1992 and hailed Taiwan’s rapid democratisation and the Taiwanese economic miracle.

She recognised Taiwan for what it is, an example of how freedom had triumphed!

Some years later in 2013, the Taiwanese Ambassador’s exclusion from Lady Thatcher’s funeral at St. Paul’s Cathedral by the Cabinet Office, despite my personal efforts and appeals to Ministers at the time, was a stark demonstration of the vindictive effect of the insistence by China that Taiwan should be completely excluded from any kind of formal diplomatic representation.

Mr Speaker, it cannot be right to force a country like Taiwan, which is to all intents and purposes, is an independent democratic sovereign state, to permanently operate under the terms of another.

The CCP should not be able to dictate Taiwan’s bilateral relations with any other state, in a world where the self-determination of peoples is considered a right.

It is time that the western democracies looked afresh at the policy of not allowing Taiwan the diplomatic presence it needs and truly deserves.

But, Mr. Speaker, I pay tribute to the work of His Excellency Kelly Wu-Chiao Hsieh and his incredible team who operate the ‘Taiwan Representative Office’ in London for the job they do, building ever stronger relations with the United Kingdom.

As Vice-Chairman of the Taiwan All-Party Parliamentary Group and President of the Conservative Friends of Taiwan, it is with pride that I have worked with Ambassador Kelly and all of his predecessors for around three decades.

I have also had the honour of visiting Taiwan on many occasions, my first visit was in 1998, but most recently, I led a delegation from the UK Parliament to Taiwan in 2017, where I was privileged to meet President Tsai Ing-wen, Taiwan’s very own iron lady who takes no nonsense from Beijing.

I also recently met the Deputy Foreign Minister of Taiwan during his visit to London.

Mr. Speaker, dialogue and diplomacy are the greatest tools in our arsenal, to support Taiwan.

It is essential that we continue these exchanges and I commend and support my colleagues on the Foreign Affairs Committee, so ably led by my Hon. Friend, the Member for Tonbridge and Malling, as they visit Taiwan in two weeks’ time.

Today, China casts its long red shadow over Taiwan, and I believe it is our duty to stand with Taiwan, alongside the United States of America, our European allies, and our friends in the Asia-Pacific region, India, Australia and Japan, to defend the freedom of the Taiwanese people against any possible aggression that threatens Taiwan’s democratic way of life.

The crackdown in Hong Kong shows China’s willingness to repudiate democracy and install its own authoritarian rule, despite international condemnation and opposition.

We must treat any assault on Taiwan as a direct assault on our very own liberal democracy.  We cannot walk by on the other side.  We must stand with Taiwan.

So, Mr Speaker, we must ensure that the light of democracy shines through and indeed, the white sun on the Taiwanese flag reminds us that ideals of liberty and freedom will always prevail.

Strengthening our relationship further will send an unambiguous signal to China that aggression will not be tolerated.

In this vein, I ask why should Taiwan not be allowed to participate in the World Health Organization?  Interpol?  Or The United Nations?

Mr. Speaker, this is the 21st Century and Taiwan’s exclusion is shocking and quite frankly dangerous.

Taiwan demonstrated its value in early 2020.

It raised concerns that Covid-19 could be spread through person-to-person transmission before the Peoples Republic of China, where the virus originated. The implementation of a virus screening programme for international arrivals meant that the coronavirus was contained without resorting to full lockdowns.

The world should have learnt from Taiwan in those early days of the pandemic. But without being part of the W.H.O., its early warning was downplayed.  This example illustrates that these are critical organisations that Taiwan should be involved in, both for the benefit of its own people, for their safety and security of the rest of the world too.

We need Taiwan to play its part in the exchange of ideas and to share its technical knowledge and expertise.

The people of Taiwan also demonstrated their commitment to the United Kingdom, when they donated one million surgical masks to our NHS at a time of critical need. They have our gratitude which demonstrates the character and virtue of close ties with Taiwan.

The United Kingdom must now focus on developing a free exchange of goods and ideas, technological innovation, mutual support and cooperation with our Taiwanese friends.

There should be no reason why Britain should not also quickly pursue a free trade agreement with Taiwan.  Let us make that a priority, Mr. Speaker.

Free trade and democracy will continue to bind us together and strengthen a dynamic, forward-looking relationship, as we seize the new opportunities for collaboration that lay before us.

Mr Speaker, let me finish by wishing the people of Taiwan good fortune, good health and prosperity for the Lunar New Year.

And in this year of the Tiger, let us, this day, send the people of Taiwan a clear message they have and will continue to have the steadfast and unwavering support of the United Kingdom.