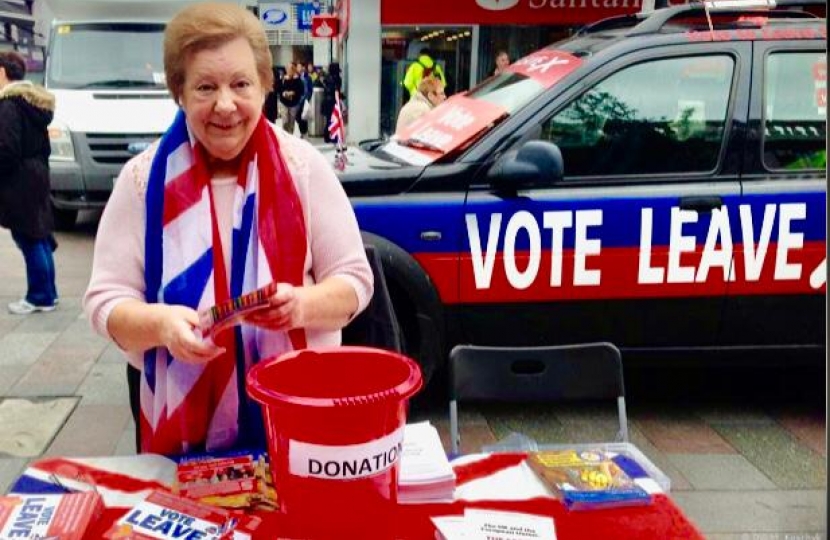 The Constituency Secretary and long-time local Caseworker for Romford M.P., Andrew Rosindell, Sue Connelly, was named in the Queen’s Birthday Honours list, set to be announced on Friday 9th of October.

Mrs Connelly will be given the British Empire Medal (B.E.M.). This is awarded for ‘hands-on’ service to the local community, for long-term charitable and voluntary activity, as well innovative work that has made a significant difference.

Sue is being awarded the B.E.M. for her work assisting the people of Romford over many years.  She described it as a “great honour to receive such an award from Her Majesty The Queen and to be acknowledged for the help I have given to people whilst working for Andrew Rosindell M.P. ”.

As a recipient, Mrs Connelly will be entitled to use the post-nominal letters “B.E.M.”

Sue has been Constituency Secretary, Caseworker and a volunteer to Andrew Rosindell M.P. for almost twenty years.

She has been an active member of the Romford Conservative Association for decades and in 2016, Sue gained global notoriety when she appeared on T.V. across the world as the face of the “Vote Leave” campaign in Romford.  She dedicated herself to the campaign to leave the European Union during that period, working alongside Andrew Rosindell M.P. to deliver a Leave vote. As a result, Havering secured the highest Leave result in the whole of the London area, much of which was down to Sue’s co-ordination of the campaign.

“I am deeply humbled to receive the British Empire Medal from our Queen.  I am so proud of this country and its history. It’s also wonderful to be appreciated for my work, by the people of Romford.”

“I am thrilled for Sue! It’s about time she was given the recognition she deserves. Sue Connelly is a true Romford institution and I am enormously proud of her work. It has been a privilege to have Sue working in my office over the years, during which time she has used her tremendous local knowledge, good humour and dedication to help my constituents in so many ways. She always goes the extra mile. This is a great day for Sue and my whole M.P.’s team and for all the people of Romford, who Sue has shown kindness to and has been able to help at their time of greatest need. Well done Sue, you’re a star!”

Q: (Andrew Rosindell) To ask the Secretary of State for Health and Social Care, with reference to the expanded flu vaccination programme, what steps his Department is taking to help ensure extremely vulnerable people receive flu vaccinations as soon as possible.