Standing Up For Brexit 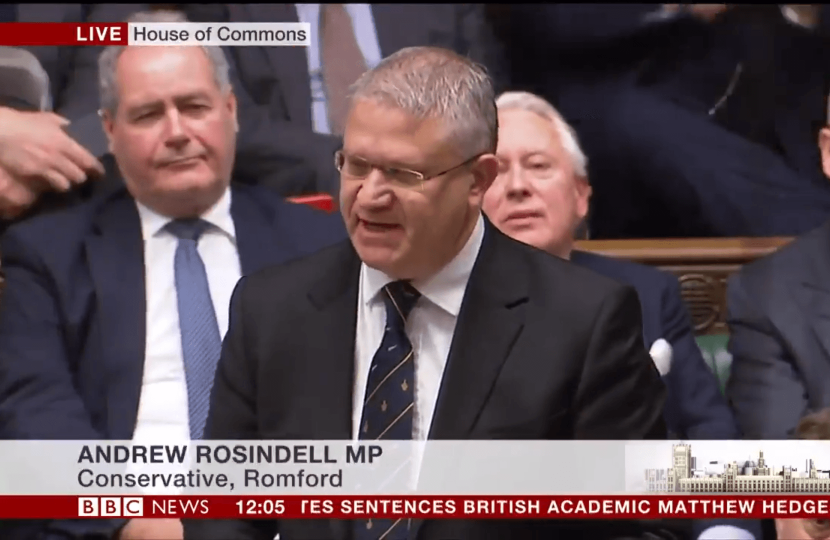 I was proud to #StandUp4Brexit at Prime Minister’s Questions today in the House of Commons. I will never stop fighting to uphold the democratic rights of the people of Romford who voted 70% to Leave the EU and give the British people back their freedom.

It is now clear that this Withdrawal Agreement does not deliver the Brexit that the people of Havering voted for. Ever since the promising Lancaster Speech, our negotiations have been reduced down to a deal which does not embrace the opportunities a truly Global Britain. Even the EU Commission’s own reports admit 90% of global trade will soon be conducted outside of the trading bloc, so what better time to leave the declining bloc.

This is why locking the UK into a “single customs territory”, with no clear leaving date and ability to unilaterally leave puts us in weakened position, unable to utilise the promising trade agreements the International Trade Department have been working on since the Brexit vote. It is almost as if our defeatist civil servants who drafted it aimed to make it look as if remaining in the EU is the less costly option.

Now is not the time to be fooled, EU leaders want to punish us for leaving, and send a message to other EU Member States who dare think about leaving. Decisions on migration are now being taken away from nation states to Brussels, and there are now shameless calls for an EU army, so I am astounded by calls from extremist Remainers who want to pretend the 2016 vote never happened, and claim that re-joining would be a sensible idea.

I must highlight that a no deal does not require more legislation, in its absence, leaving on World Trade Organisation rules occurs on the 29th March automatically. This is how we already conduct around half of our global trade.

From the beginning the Government should have presented a Canada style deal or WTO as a viable position, undercutting the EU’s tactics which took advantage of our negotiators, who looked desperate to get any deal possible. As I reminded the Prime Minister in the House of Commons last week, Brexit is a means to an end, not an end in itself. A new direction must be sought.