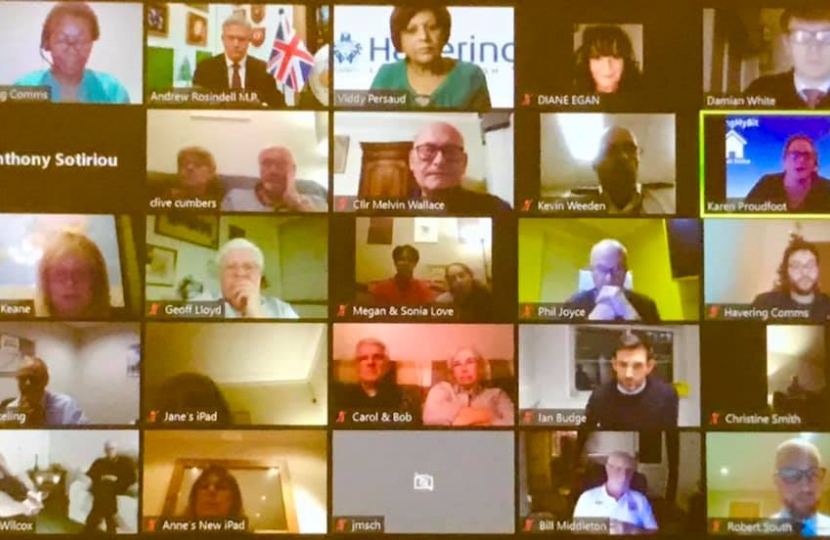 On the 26th of November, Andrew joined representatives from across the Ardleigh Green Community for an online zoom meeting to discuss the urgent need to tackle crime and anti-social behaviour.

The meeting was called as a result of recent violence and anti-social behaviour emanating from Havering College in Ardleigh Green.

The meeting was chaired by Cllr. Viddy Persaud.

Opening the meeting, Cllr Damian White, Leader of Havering Council said he was delighted by the response of the community to recent events which allowed for the organisation of a first community Zoom meeting, and said he hoped such meetings could be replicated in future.

Andrew reassured the Ardleigh Green community during the meeting that he is "firmly on the side of local residents who for a number of years have had to put up with anti-social behaviour and more recently acts of violence." He added that there is a "feeling the community has changed for the worse", but insists that "we can reverse this and return Ardleigh Green to being a family friendly community." To do that, Andrew said "everyone has to work together including the college, local residents, police, local businesses and other local organisations." He extended his thanks to Havering Council for organising the meeting.

Public and Communities Safety Manager Diane Egan said during the meeting that the Council "takes all complaints of anti-social behaviour and violence very seriously", adding that the Council is working "with the police and other partners to address these issues." The Council has deployed "council-funded police officers and tactical enforcement team to provide a high-visibility presence in the area." The Council has also coordinated additional operations with the police "including the deployment of knife archers and drug dogs to support the dispersal zones the police have put in."

The representative from the Police said to the meeting that "violent crime is the Metropolitan Police's number one priority" and the Police is working with the college and has run a number of operations in and around the college which have resulted in "a number of arrests" which the Police expect will lead to prosecutions.

Paul Wakeling, Principal of Havering College, apologised on behalf of the college to residents during the meeting for any anti-social behaviour and violence from students. He reassured residents that actions from the college, the Police, local businesses and others are bringing the number of incidents down. In response to questions about the role of the school in monitoring the local area during lunch and hometime, he said that the Deputy Principal patrols the area daily to monitor potential anti-social behaviour and that "the vast majority of those the college have had to discipline or take action against are from Havering."

Addressing the issue of the college's location, he said the college has changed and "this has to be a turning point" and that the people of Ardleigh Green "have reached the limits of their patience." He said that "he cannot stand by and watch people live in fear in the community, with people fearing that it's not very safe living in Ardleigh Green anymore."

Closing the meeting, Cllr. Damian White thanked all attending and said it was something "very positive" and he hoped that the dialogue could be continued.

"I want to take this opportunity to thank everyone for attending the meeting yesterday. I urge all those who live, work, or have other conncetions to Ardleigh Green to help us to make our community safe. As a first step I would recommend that all join the Ardleigh Green Neighbourhood Watch Facebook page!"