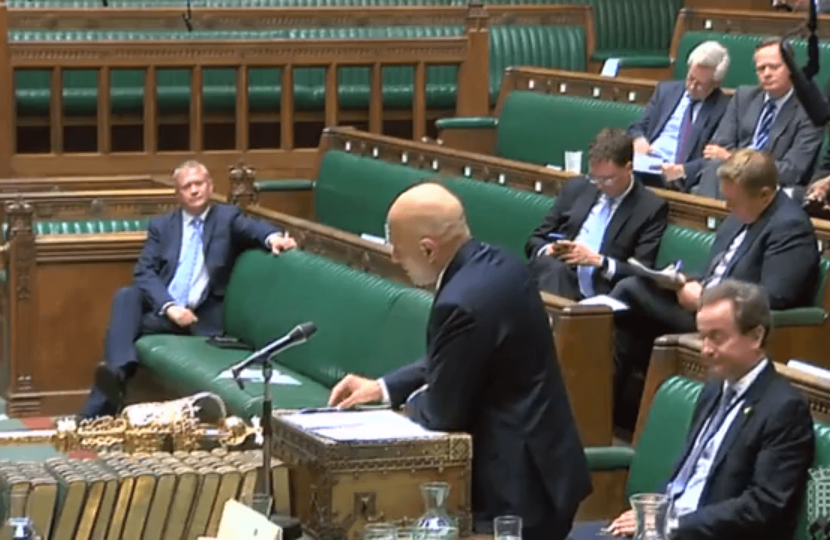 Following the latest tragic incident in Romford, here are a few of my interventions during the Second Reading of the Offensive Weapons Bill. While it is a step in the right direction to tackle serious violence, we need to properly stamp out the root causes of gangs, and ensure the punishment fits the crime, no more soft sentencing.

Here are the interventions I made in the debate.

The murder of the young man to whom the Home Secretary referred at the beginning of his remarks took place in the Collier Row part of my constituency. My right hon. Friend will know that we are not used to that kind of crime and people in my area are living in fear. Yesterday we had another incident, this time involving a machete-wielding individual near the town centre. Last month, we had the murder of an elderly lady with a hammer. Crime is spreading out to areas such as Essex, and I have to say that we need more than what is in the Bill. Measures need to be much tougher and the punishment has to fit the crime. Most people want the Conservatives to be a party that really gets to grips with this issue, because people in my area and many other parts of the country are really frightened at the moment.

The Secretary of State for the Home Department (Sajid Javid)

My hon. Friend is absolutely right to raise this issue. I know that soon after the terrible crime in his constituency this weekend, he was on the scene with others. I look forward, if I have the opportunity, to discussing the incident with him in more detail and ​listening to his ideas. He is right that more is needed than just this Bill, and I assure him that these measures are part of a much larger sweep of action the Government are taking, which I will talk about in a moment. I also want to listen to colleagues such as him about what more we can do. I would be happy to do that and to discuss how we can prevent such crimes taking place on our streets.

A young man was murdered with a knife in terrible circumstances in Romford on Saturday evening. We can ban these weapons if we like, but the Home Secretary needs to be aware that if someone with criminal intent wants to get hold of one, they will find a way. I commend the Bill and I will support it, but surely we should also be looking at how young people are being brought up. We should look at what is happening in the home and in schools and at whether young people are being taught the values of right and wrong and behaving in a decent way. They can learn this from early childhood, and schools have a role to play in enforcing discipline. Parental guidance and strong support from families are also important. The family unit is important if young people are to grow up in a society where they can live freely without committing these kinds of crimes. Should we not be looking at the whole thing in a rounded way, not just banning things? Should we not be looking at how we can ensure that young people grow up to be good citizens of this country?

The Secretary of State for the Home Department (Sajid Javid)

My hon. Friend has raised the death of Jordan Douherty, which tragically occurred this weekend following a knife attack, and I am glad that he has made ​that important point. While the Bill can achieve a few things—we have talked about acid and knives falling into the wrong hands, for example—no Bill can by itself stop someone who is intent on taking this kind of vicious action. As he says, that requires a much more holistic approach to ensure that all aspects of government and non-Government bodies, charities and others are involved. Education is also a vital part of that, as is parenting. In some cases, there is better parenting, but there are no easy answers to any of this. He is absolutely right to suggest that we need to have a much more holistic approach. I can assure him that this is exactly why the serious violence taskforce has been created, and this is exactly the kind of work that we are trying to achieve.

One problem in my constituency following the murder on Saturday evening is the feeling that the police do not have enough resources. I agree with the hon. Lady. We cannot keep reducing resources for policing and say it will not have an effect on crime; clearly it will. However, Havering in my area, for example, is part of Greater London, so the resources are allocated by the Mayor of London. Our area gets far less than other parts of London. Yes, let us have more resources, but does the hon. Lady agree that areas like mine need a fairer slice of the cake? If crime is moving out to areas such as Essex, we need resources. We are not inner London—we are completely different—and therefore need a different style of policing and adequate resources to make our communities safe.

The hon. Gentleman is absolutely right that resources should follow demand. That is why it is a crying shame that the Government have kicked the can down the road on the police funding formula, which has denied resources to areas of the country that are in serious need of police resources. That funding formula should be based on demand.

I agree with much of what the hon. Lady says, but can she envisage how local people in Havering feel? We are part of Essex, yet we are lumped into Greater London. My hon. Friend the Member for Chelmsford (Vicky Ford) proudly speaks of 150 new policemen for Essex, but people who come to Romford will realise that we are Essex, rather than London. However, we get so few resources from the Mayor of London—we really are left out. We are getting no extra policemen and far fewer resources than we need.

Will the hon. Member for Sheffield, Heeley (Louise Haigh) please speak to Sadiq Khan and see whether he will prioritise the London Borough of Havering and give us the resources we need, or whether he will give us the chance to be a unitary authority outside of the Greater London area so we can manage our own resources and keep our communities safe?

I am sure Chelmsford has received both policemen and policewomen. I am sure the Mayor of London will be watching this debate closely, but I commit to passing the hon. Gentleman’s remarks on to him.

Where I am going is to make this point: somebody who had 14 previous knife offences and who was then convicted of another knife offence should be sent to prison. The hon. Lady might not agree with that—that is her prerogative—but she will find herself in a minority on that particular view.

I hope the Minister will listen carefully to my next point. Serious offences with knives and offensive weapons, not necessarily trading offensive weapons, should come within the unduly lenient sentence scheme. Perhaps that is something that could be addressed in this Bill. I also wish to support an extension of the principle that committing a subsequent similar offence means a mandatory sentence. I would like to see a sentencing escalator, which means that every time a person is recommitted for the same offence they get a higher sentence than they received the previous time.

Very quickly, I wholeheartedly endorse everything that my hon. Friend is saying. Does he agree that there must be a deterrent? If there is no deterrent, the crimes will carry on being committed and there will be no end to this. The punishment must fit the crime, and people must be deterred from committing these acts of violence.

Absolutely. I could not agree more with my hon. Friend.