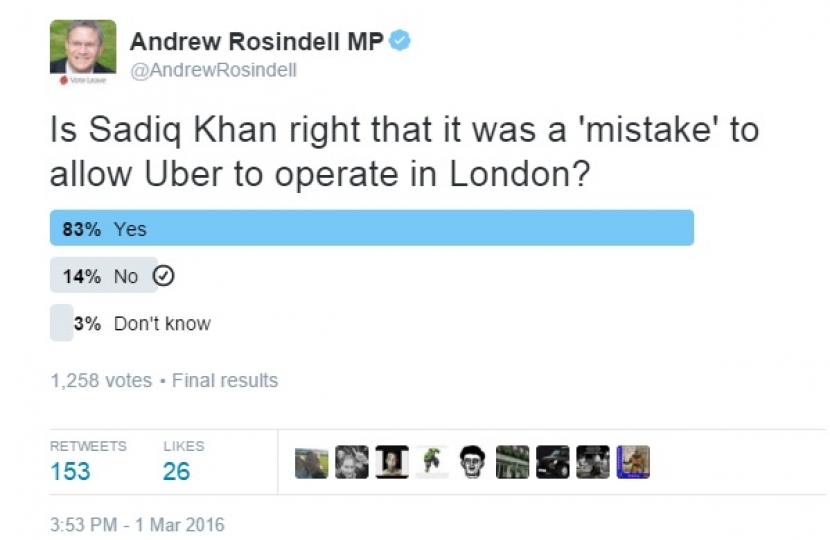 Between Monday 1st and Tuesday 2nd March, Andrew held a Twitter poll asking if London Labour’s mayoral candidate, Sadiq Khan, was right to suggest that it was a ‘mistake’ to allow Uber to operate in London.

With 1,258 respondents, the survey revealed that 83% support further regulation of the technology company Uber which operates across London. This statement comes six months after his Conservative opponent in the mayoral race, Zac Goldsmith, stated that Uber is guilty of pricing out black cabs through predatory practices.

‘What started as a bit of fun on Twitter quickly became a forum for vocalising a strong political message about an issue of real importance to many who live and work in and around the city of London. That message needs to be heard.

‘I have said many times that the complexities of licensing for Uber drivers must be simplified and be brought in line with that of other taxi drivers. The taxi industry needs balancing so that there is equal and competitive access to the market for black cab, minicab, and Uber drivers.

‘Evidence shows that the inconsistencies with licensing isn’t just putting jobs at risk but also public safety, and this cannot be allowed to continue. Both candidates are right to bring attention to this issue and I hope and believe that as Mayor of London, Zac will take action in the interests of all Londoners.’