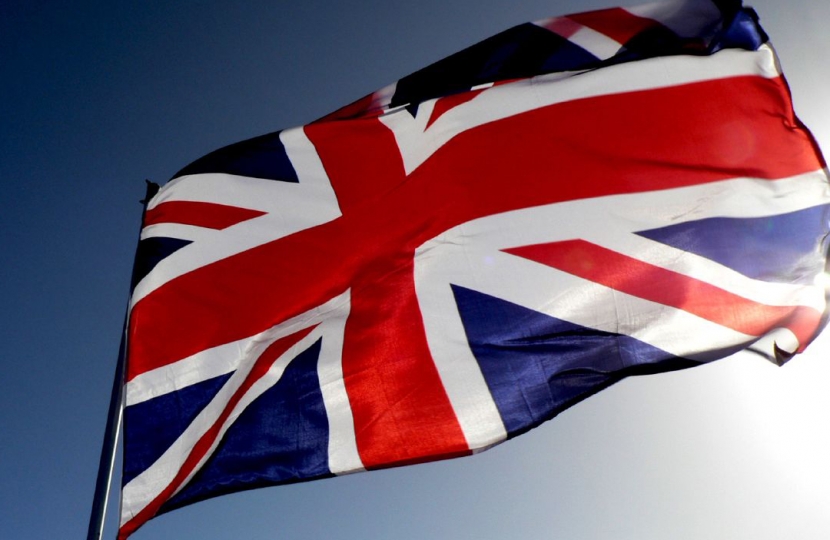 Since his election in 2001, Andrew Rosindell has campaigned consistently to promote patriotism throughout England and the UK.

For many years, he has campaigned to have the Union Jack flown from important public buildings throughout the UK, and in 2010, was successful in his campaign to have the it flown from the Houses of Parliament all year round, not just when Parliament was sitting.

Additionally, he has worked tirelessly to reclaim the Cross of St. George from English nationalists who have done much to associate it solely with racism and hooliganism, and to make St. George’s Day a national holiday in England.

In addition to his work on flags, Andrew has also campaigned for patriotism to be taught in schools.

Regarding his work on patriotism, Andrew has said:

“Patriotism is an important force which binds nations together. In modern, diverse Britain, it is important that we have common culture and set of values to which we all adhere.

Flags, national holidays, celebrations of British identity – all of these help to bring people together. We should teach children from a young age just how lucky they are to live in Britain. It is, after all, a wonderful country with a fascinating history and an exciting future. It has survived precisely because of a successful set of tried and tested values, and these must remain at core of everything we do.

Across the world, children are taught to love their countries and to stand shoulder to shoulder under their national flag. In Britain, we seem to only become patriotic at football and rugby games. As important as this is, we need both adults and children to feel part of something magnificent. What people need to understand is that our flag and national anthem give us all - irrespective of background - something to look up to and rally around. It is vitally important for social cohesion in the long term.”

On 19th July Andrew Rosindell chaired the second meeting of the Platinum Jubilee APPG, set up to coordinate efforts by M.P.s and Lords to commemorate Her Majesty The Queen's historic 70th year as Sovereign in 2022.

The England team did our nation proud. We all feel a little bit better about English football now than we did a month ago and that’s something to celebrate.

On this Armed Forces Day we say thank you

Freedom is a precious thing. It is what gives birth to democracy, the rule of law, the ability to speak our minds, associate with whom we choose and speak our native language.

The Cross of St George is flying from flagpoles in the House of Commons for the first time - exactly 360 years since the coronation of Charles II.

Parliamentarians, including M.P.s and Lords met virtually on the evening of the 12th of January 2021 to establish an All-Party Parliamentary Group (APPG) in celebration of The Queen’s Platinum Jubilee which takes place in 2022.

On this locked-down Armistice Day, let us lose liberty no more

Originally published in the Conservative Woman

Andrew Rosindell will lay a wreath at 11am today, Remembrance Sunday, at the Coronation Gardens in Romford. Commenting, Andrew said:

Today, Havering Town Hall proudly flies the flag of the County of Essex, the historic county to which we are proud to belong, marking Essex Day! In Romford, our Essex identity remains as strong as ever!

Why the Poppy is as important as ever

This November will be my twentieth visit to the Coronation Gardens in Romford to lay a wreath and pay my respects to the brave men and women who sacrificed their lives for King, Queen, country and Commonwealth in two world wars and in many other conflicts in both the last century and this.